Outlining the architecture history of Colonna Palace is as fascinating as complex.
The main point is that there would be no trace of history without mentioning some members of the Colonna family that have been living there for 23 generations, from the origins to nowadays. 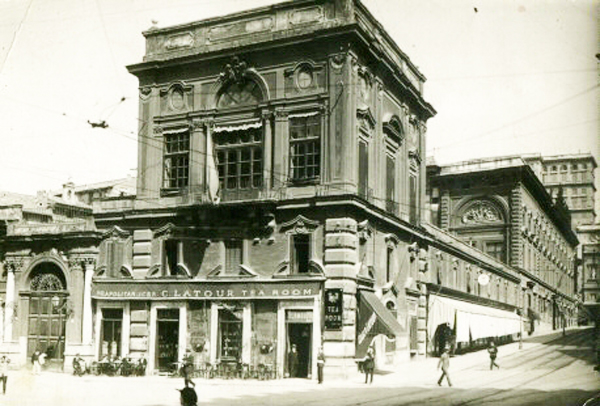 It took five centuries (1300-1700) to build all the wings of Colonna Palace. This led to an overlapping of different architectural styles, interior and exterior, that characterizes and reflects all the different periods.
In 1341, the Palace hosted the poet Petrarca on the occasion of his coronation on the Capitol. A document dated 1508 reports of another palace of the Colonna Family, located near the Church of SS. Apostoli. This Palace was used by Cardinal Giovanni Colonna in 1241 and Cardinal Giacomo Colonna in 1286 . Also Oddone Colonna, elected Pope in 1417 under the name of Martino V, chose the Palace as the Pontifical Seat and lived there from 1420 to 1431, the year of his death.
In the second half of the XVI century , Cardinal Ascanio Colonna (1560-1608), who held the position of Probibliotecario at the Vatican Library, inherited the ex Palazzina della Rovere. Throughout the 1600s, the family lived its most sumptuous period and the Palace turned into a large Baroque palace. The first promoter was prince Filippo I Colonna (1587- 1639), who carried out the project of the monumental entrance of the garden in Via XXIV Maggio and, thanks to the help of architect Paolo Marucelli, renovated the Palace of SS. Apostoli. In 1625, Pope Urbano VII Barberini authorized Filippo I Colonna to pull down the ruins of the Serapide Temple. The precious marbles were used in part for Galleria Colonna and in part according to Pope’s desires. When Filippo I died in 1639, his birthright and his feuds were inherited by Girolamo I, who became Cardinal in 1628. He was a sensible and enlightened patron and he is considered the founder of the Raccolta Colonna. From 1649, Girolamo I undertook massive renovation works in the Palace, including the building of a new apartment on the southern side of the Basilica SS. Apostoli. In 1650 he commissioned to the architect Antonio del Grande the building of the Gallery , in order to guard a remarkable collection of paintings and classic statues. 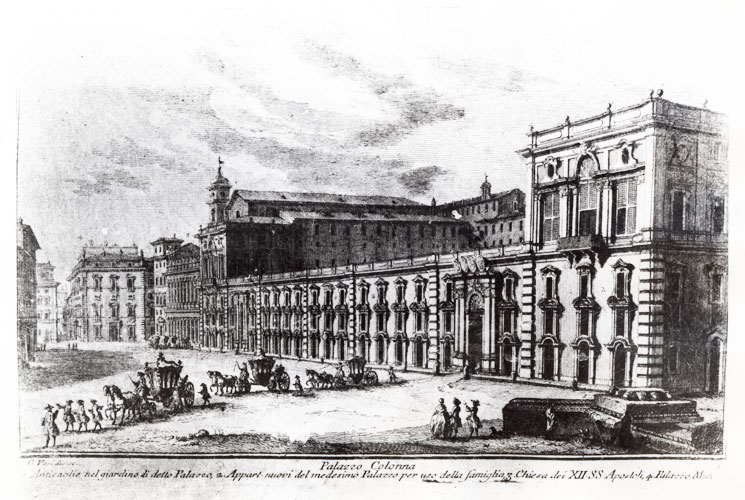 After the death of Girolamo I in 1664, his heir Lorenzo Onofrio Colonna continued these renovation works. The decorative works in the Gallery went on with Filippo II and his architect, Girolamo Fontana, until inauguration in 1703. Filippo II’s son, Fabrizio Colonna, changed the Palace project. Between 1731 and 1733, with the collaboration of the architect Niccolò Michetti, the “Coffee House” was built. The decorations of the “Martino V Apotheosis” Room by Pompeo Batoni and Pietro Bianchi date back to these years.
After the end of 1700s the structure remained unchanged up to the present day, except for the grand staircase at the Palace’s entrance from via XXIV Maggio, built in 1880 on the basis of a project by architect G.A.Gui, the renovated elevation, during the first half of 1900s on the then Via Nazionale, by the architect Clemente Busiri Vici, and the re-arrangement of the Palace’s entrance courtyard, in 1968, with the placement of an ancient caristio marble column in the middle, inserted between arboreal decoration, according to architect Tommaso Buzzi’s project.